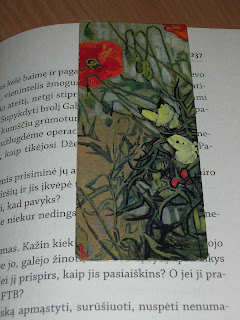 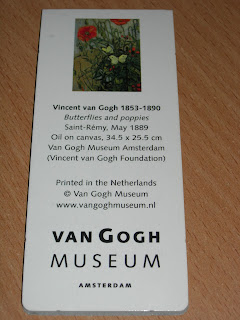 Between them, Vincent and Theo had a considerable collection of Japanese prints, and the influences of Japanese art are clearly visible in this decorative floral piece. The close-up of the flowers and insects is typically Japanese, as are the asymmetric composition and the lack of depth.

Amidst a confusion of green foliage, Van Gogh created butterflies with a few dabs of paint – a counterpoint to the two flowers at the top of the painting. The vegetative profusion at lower right contrasts with the emptiness at left, where whole areas of canvas remain unpainted.

Vincent Willem van Gogh 30 March 1853 – 29 July 1890 was a Dutch post-Impressionist painter whose work had a far-reaching influence on 20th century art for its vivid colors and emotional impact. He suffered from anxiety and increasingly frequent bouts of mental illness throughout his life and died, largely unknown, at the age of 37 from a self-inflicted gunshot wound.
Little appreciated during his lifetime, his fame grew in the years after his death. Today, he is widely regarded as one of history's greatest painters and an important contributor to the foundations of modern art. Van Gogh did not begin painting until his late twenties, and most of his best-known works were produced during his final two years. He produced more than 2,000 artworks, consisting of around 900 paintings and 1,100 drawings and sketches. Today many of his pieces—including his numerous self portraits, landscapes, portraits and sunflowers—are among the world's most recognizable and expensive works of art. More...

Posted by Skandinave at 2:48 AM