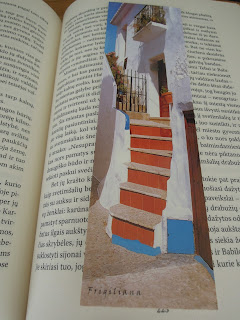 Frigiliana is a town and municipality in the province of Málaga, part of the autonomous community of Andalusia in southern Spain. The municipality is situated approximately 71 kilometers east of Málaga, the provincial capital, and approximately 6 kilometers north of Nerja. It is located in the comarca of La Axarquía, the easternmost region of the province, and integrated into the judicial district of Torrox.
Voted the 'prettiest village in Andalucía' by the Spanish tourism authority, Frigiliana is also important from an historical viewpoint. El Fuerte, the hill that climbs above the village, was the scene of the final bloody defeat of the Moors of La Axarquía in their 1569 rebellion. The hill is topped by scanty remains of a ruined fort from which some of the Moors reputedly threw themselves rather than be killed or captured by the Spanish. It is said that bones and rusted weapons dating from this encounter still lie among the scrub on El Fuerte.
The village is a tangle of narrow cobbled streets lined by whitewashed houses, their wrought-iron balconies filled with planters of brilliant red geraniums. Small plazas provide shady seating while the village bars are popular with visitors who come here to taste the locally produced wine. There are also several excellent shops selling pottery and ceramics, including decorative plates with their distinctive Arab design. 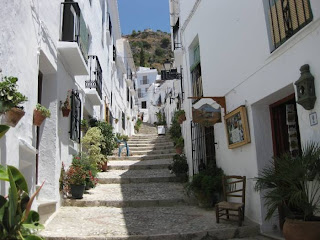 Posted by Skandinave at 3:41 PM