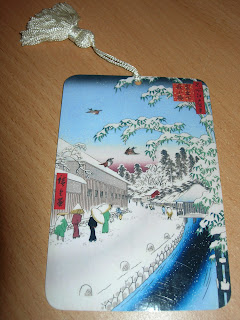 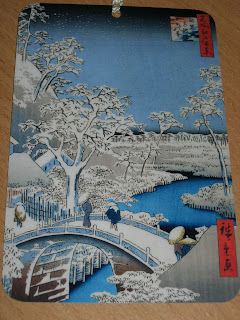 This is a beautiful bookmark featuring snow scenes taken from the One Hundred Famous Views of Edo series of woodblock prints by Utagawa Hiroshige. Each side of the bookmark depicts a different print (photo depicts front and back of bookmark). It includes a matching ivory-colored tassel and is about 4.75"x2.5" (not counting the tassel).


Utagawa Hiroshige ( 1797 – October 12, 1858) was a Japanese ukiyo-e artist, and one of the last great artists in that tradition. He was also referred to as Andō Hiroshige  (an irregular combination of family name and art name)[1] and by the art name of Ichiyūsai Hiroshige .More...

Edo was the city where the artist Utagawa Hiroshige  was born, lived, and died, and it is the place depicted in the majority of his landscape prints. Edo (renamed Tokyo in 1868) was the largest city in the world by the eighteenth century, with a population of more than one million people. Established first as a castle town in 1590, Edo became the de facto political capital of Japan in 1603.More... 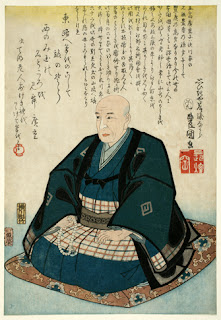