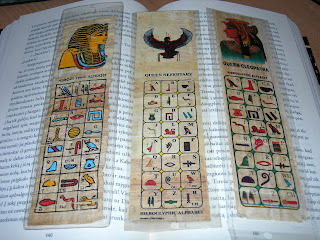 These bookmarks are made from genuine Egyptian papyrus and printed with a unique Egyptian design. Each bookmark comes in its own plastic sheath with tassle.
The ancient Egyptians used papyrus as a form of paper. It was made from the papyrus reed that grew along the banks of the Nile. Strips of papyrus pith were arranged on two layers, one horizontal, the next vertical. They were covered with linen and heavy pressure applied. The strips would weld together in their own sap.
The papyrus bookmarks and made from papyrus and each has an image of an ancient Egyptian scenes on it  and shows the Hieroglyphic Alphabet .
Posted by Skandinave at 10:23 AM