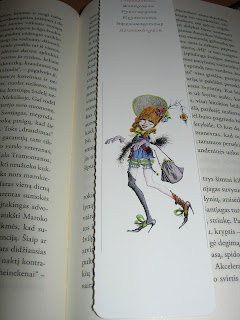 Pippi Longstocking  is a fictional character in a series of children's books by Swedish author Astrid Lindgren, and adapted into multiple films and television series. Pippi was named by Lindgren's then nine-year-old daughter, Karin, who requested a get-well story from her mother one day when she was home sick from school.
Nine-year-old Pippi is unconventional, assertive, and has superhuman strength, being able to lift her horse one-handed without difficulty. She frequently mocks and dupes adults she encounters, an attitude likely to appeal to young readers; however, Pippi usually reserves her worst behavior for the most pompous and condescending of adults. She turns white around the nose whenever she gets angry, though this rarely happens. Pippi's anger is reserved for the most extreme cases, such as when a man ill-treats his horse. Like Peter Pan, Pippi does not want to grow up. More... More...

Posted by Skandinave at 9:18 AM