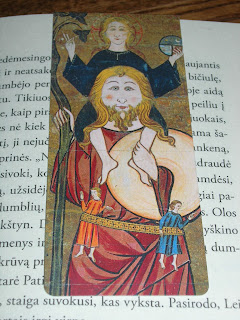 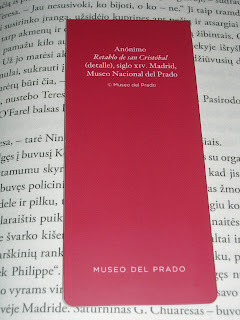 This small altarpiece, divided into three horizontal and three vertical rows, is dedicated to Saint Christopher, who protects against sudden death. His image occupies the central row, which is topped by the Crucifixion.

Saint Christopher was a third-century martyr known as “Christ's Carrier,” because of his legend. Born as Offerus or Reprebus, he wished to use his enormous strength and uncommon size to serve the most powerful king in the world. But he found fault with all of them. In his search, he met a hermit who spoke to him of offering his gift to Christ. The hermet converted and baptized him. From then on, Christopher offered to carry people form one bank to the other of a powerfully flowing river as an act of devotion. One day he had to carry a Child whose weight increased as he drew near the shore. When Christopher asked the child about this, the boy identified himself as Christ and answered that, as Lord of the Universe, he had to bear all its weight. As proof, he ordered the saint to push the staff he usually leaned on into the riverbed. Miraculously, a palm tree grew out of it.
Here, Saint Christopher is shown carrying a millstone with his left arm as proof of his extraordinary strength. The Christ Child sits on his shoulders holding the Earthly Globe, which is divided into earth, sky and water.

The lateral rows have scenes from the lives and martyrdom of other saints: Peter, Blas and Millan, who are identified by their names on the molding separating them, as well as an incense-bearing angel at the top.

This artist of fourteenth-century Castilian Franco-Gothic or Lineal Gothic style maintains the hierarchical perspective among figures. The quality of his drawing is especially outstanding.

The origins of this altarpiece are unknown, but it may come from a Benedictine monastery in la Rioja, as it includes a scene from the life of Saint Millan. The lion and castle repeated around the work's edges symbolize the kingdoms of Castile. 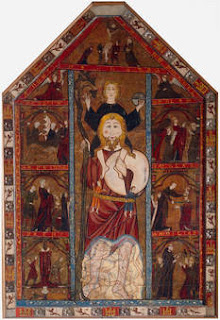 Posted by Skandinave at 4:11 AM