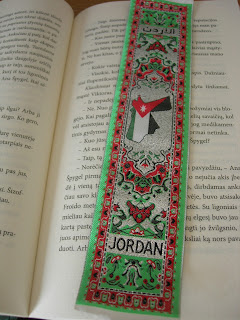 Jordan , officially the Hashemite Kingdom of Jordan ,  is a kingdom on the East Bank of the River Jordan. The country borders Saudi Arabia to the east and south-east, Iraq to the north-east, Syria to the north and the West Bank and Israel to the west, sharing control of the Dead Sea with the latter. Jordan's only port is at its south-western tip, at the Gulf of Aqaba, which is shared with Israel, Egypt, and Saudi Arabia. Over half of Jordan is covered by the Arabian Desert. However, the western part of Jordan is arable land and forests. Jordan is part of the Fertile Crescent. The capital city is Amman. According to the CIA World Factbook, Jordan has the second highest life expectancy in the Middle East, after Israel. The average life expectancy is one position behind the United Kingdom, although the age remains exactly the same (80.05 years). More...

Thank you my bookish friend, Jurate :)
Posted by Skandinave at 3:18 AM