Shapely the paper bookmark with nationally symbolic carvings, and a white card, which will be able to write a greeting or greeting a fellow, and maybe the most meaningful to write down a quote or slogan. 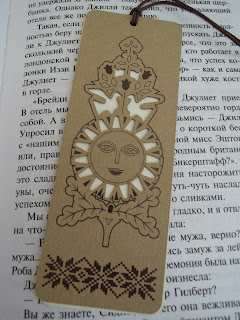 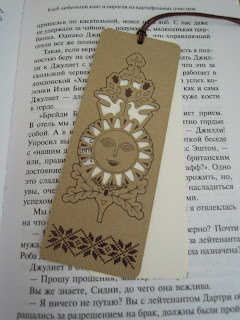 Distaff  is a tool used in spinning. It is designed to hold the unspun fibers, keeping them untangled and thus easing the spinning process. It is most commonly used to hold flax, and sometimes wool, but can be used for any type of fiber. Fiber is wrapped around the distaff, and tied in place with a piece of ribbon or string. The word comes from dis in Low German, meaning a bunch of flax, connected with staff.
A spindle is a straight spike usually made from wood used for spinning, twisting fibers such as wool, flax, hemp, cotton into yarn. It is often weighted at either the bottom, middle, or top, commonly by a disc or spherical object called a whorl, but many spindles exist that are not weighted by a whorl, but by thickening their shape towards the bottom, such as Orenburg and French spindles. The spindle may also have a hook, groove, or notch at the top to guide the yarn. Spindles come in many different sizes and weights depending on the thickness of the yarn one desires to spin. 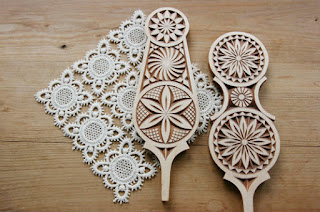 Posted by Skandinave at 6:21 PM