In Norse mythology, a troll is a generally negative synonym for jötunn. In Scandinavian folklore, trolls became beings in their own right. In modern times, trolls are depicted in a variety of media.
In Norse mythology, troll, like thurs is a term applied to jötnar. In Old Norse sources, trolls are said to dwell in isolated mountains, rocks, and caves, sometimes live together (usually as father-and-daughter or mother-and-son), and are rarely described as helpful or friendly.[1]
Later, in Scandinavian folklore, trolls become defined as a particular beings, generally held to be larger than humans and notably ugly.[2] Numerous tales about trolls are recorded, in which they are frequently described as being extremely old, very strong, but slow and dim-witted. They are sometimes described as man-eaters and as turning to stone upon contact with sunlight. Into the 20th century, the origins of particular Scandinavian landmarks, such as particular stones, are ascribed to trolls.[3]
A Scandinavian folk belief that lightning frightens away trolls and jötnar appears in numerous Scandinavian folktales, and may be a late reflection of the god Thor's role in fighting such beings. In connection, the lack of trolls and jötnar in modern Scandinavia is explained as a result of the "accuracy and efficiency of the lightning strokes".[4] 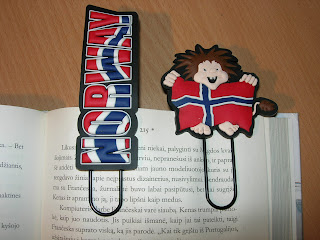 Thanks my friend, Eugenija :)
Posted by Skandinave at 5:51 PM